The move makes the United States the first country to recognise Jerusalem as Israel's capital. Palestinians called a general strike as world leaders from across the Arab world and some from Europe denounced the move.


President Donald Trump recognised the disputed city of Jerusalem as Israel's capital on Wednesday, an historic decision that overturns decades of US policy and risks triggering a fresh spasm of violence in the Middle East.
"I have determined that it is time to officially recognise Jerusalem as the capital of Israel," the US leader said in a speech from the White House.
Israel considers the city its eternal and indivisible capital and wants all embassies based there.
Israel's Prime Minister had nothing but praise for Trump's decision.
Palestinians call for general strike
Various groups from Palestine on Wednesday called for a general strike and rallies to protest Trump's announcement.
Answering the call for a strike on Thursday, the Palestinian education ministry declared a day off and urged teachers as well as high school and university students to take part in the planned rallies in the Israeli-occupied West Bank, the Gaza Strip and Palestinian areas in Jerusalem.
Palestinians want the capital of an independent Palestinian state to be in the city's eastern sector, which Israel captured in the 1967 Middle East war and annexed in a move never recognised internationally.
The US president also kicked off the process of moving the American embassy from Tel Aviv to Jerusalem, making good on a campaign promise dear to evangelical Christian and right-wing Jewish voters – as well as donors.
TRT World's Frank Ucciardoreports from Washington.
UN Secretary General Antonio Guterres says the only way peace can be achieved is by a two-state solution and making Jerusalem the capital of both Israel and Palestine.
Trump added Jerusalem must remain a holy site for three major religions – Islam, Christianity and Judaism – and that delaying recognition of Jerusalem as the Israeli capital has done nothing to achieve peace.
Trump said his decision marked the start of a "new approach" to solving the thorny conflict between Israel and the Palestinians -- as he insisted Washington remained intent on pursuing a peace deal for the region.
TRT World spoke to Muhannad Alami, a journalist in Ramallah.
A 'regrettable' move
Israeli Prime Minister Benjamin Netanyahu hailed the move as "historic" and a "courageous and just decision".
The head of the militant group Hamas accused Trump of disregarding Palestinian feelings with his recognition of Jerusalem as Israel's capital.
Ismail Haniyeh says in a statement that the Palestinian people "know how to respond properly to the disregard of their feelings and sanctuaries."
United Nations Secretary-General Antonio Guterres said there was no alternative to a two-state solution between Israel and the Palestinians and that Jerusalem was a final-status issue that should be resolved through direct talks.
French President Macron said the Jerusalem move 'regrettable'.
There has long been pressure from pro-Israel politicians in the United States to move its embassy from Tel Aviv to Jerusalem, and Trump made it a signature promise of his campaign during the 2016 presidential election.
But the president's critics say Trump's move will inflame Middle East tensions and plunge an already volatile region into even more uncertainty.
Why is Jerusalem important?
Source: TRTWorld and agencies
Category News 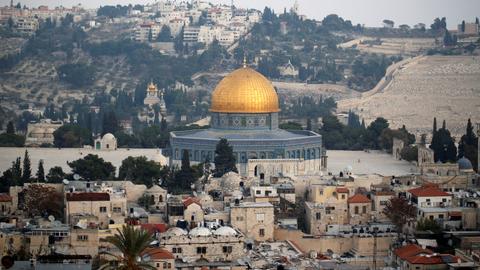 World leaders respond to US embassy move to Jerusalem 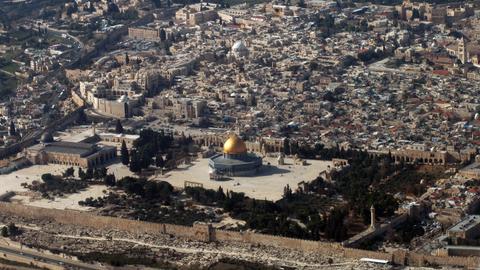 Trump tells Mideast leaders he will move embassy to Jerusalem