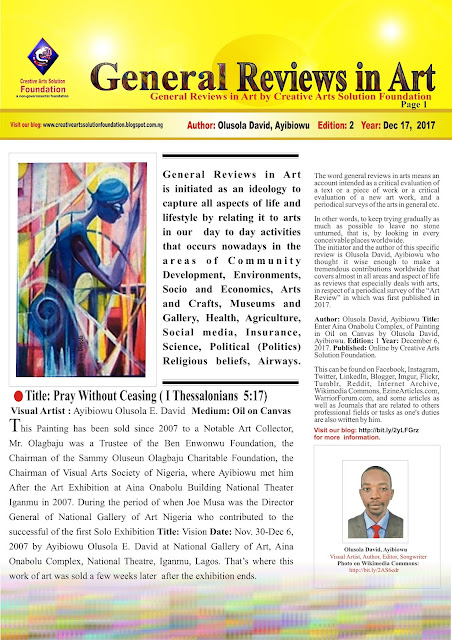 Find it on : WikiArt 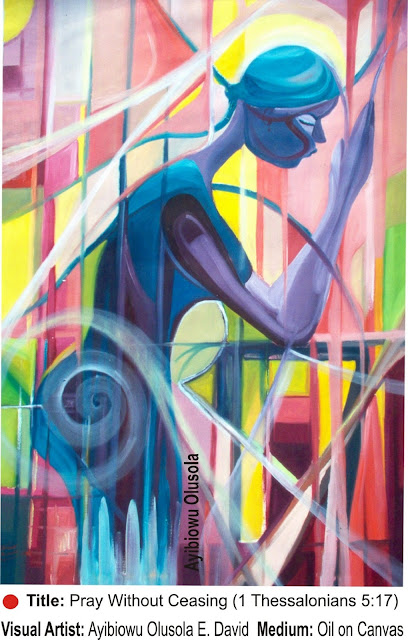 This Painting has been sold since 2007 to a Notable Art Collector, Mr. Olagbaju was a Trustee of the

the Chairman of Visual Arts Society of Nigeria, where Ayibiowu met him After the Art Exhibition at

Aina Onabolu Building National Theater Iganmu in 2007. During the period of when Joe Musa was

art was sold a few weeks later after the exhibition ends.


General Reviews in Art is initiated as an ideology to capture all aspects of life and lifestyle by relating it to arts in our day to day activities that occurs nowadays in the areas of Community Development, Environments, Socio and Economics, Arts and Crafts, Museums and Gallery, Health, Agriculture, Social media, Insurance, Science, Political (Politics), Religious beliefs, Airways.

The word general reviews in arts means an account intended as a critical evaluation of a text or a piece of work or a critical evaluation of a new art work, and a periodical surveys of the arts in general etc.
In other words, to keep trying gradually as much as possible to leave no stone unturned, that is, by looking in every conceivable places worldwide.
The initiator and the author of this specific review is Olusola David, Ayibiowu who thought it wise enough to make a tremendous contributions worldwide that covers almost in all areas and aspect of life as reviews that especially deals with arts, in respect of a periodical survey of the “Art Review” in which was first published in 2017 Author: Olusola David, Ayibiowu Title: Enter Aina Onabolu Complex, of Painting in Oil on Canvas by Olusola David, Ayibiowu. Edition: 1 Year: December 6, 2017. Published: Online by Creative Arts Solution Foundation.
This can be found on Facebook, Instagram, Twitter, LinkedIn, Blogger, Imgur, Flickr, Tumblr, Reddit, Internet Archives, Wikimedia Commons, EzineArticles.com, WarriorForum.com, and some articles as well as Journals that are related to others professional fields or tasks as one’s duties are also written by him.