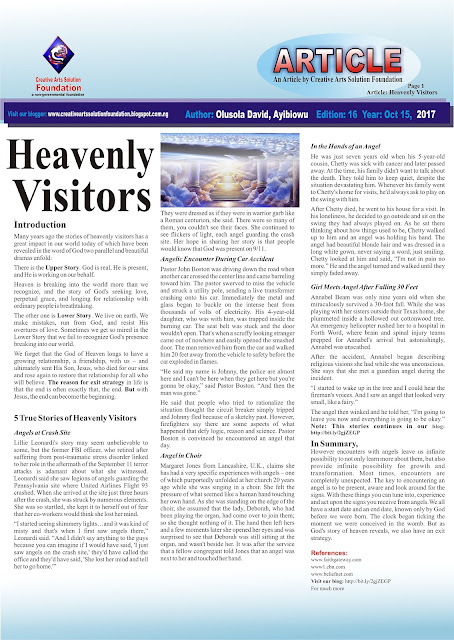 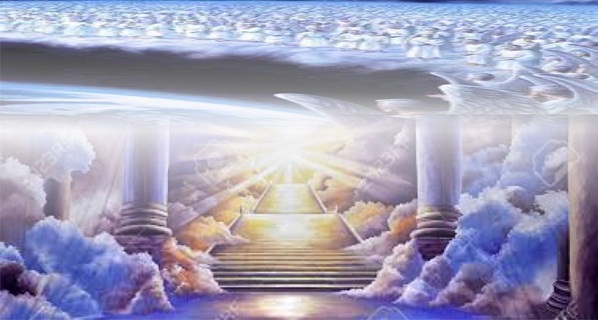 Introduction
Many years ago the stories of heavenly visitors has a great impact in our world today of which have been revealed in the word of God two parallel and beautiful dramas unfold:
There is the Upper Story. God is real, He is present, and He is working on our behalf.
Heaven is breaking into the world more than we recognize, and the story of God’s seeking love, perpetual grace, and longing for relationship with ordinary people is breathtaking.
The other one is Lower Story. We live on earth. We make mistakes, run from God, and resist His overtures of love. Sometimes we get so mired in the Lower Story that we fail to recognize God’s presence breaking into our world.
We forget that the God of Heaven longs to have a growing relationship, a friendship, with us – and ultimately sent His Son, Jesus, who died for our sins and rose again to restore that relationship for all who will believe. The reason for exit strategy in life is that the end is often exactly that, the end. But with Jesus, the end can become the beginning. Lillie Leonardi’s story may seem unbelievable to some, but the former FBI officer, who retired after suffering from post-traumatic stress disorder linked to her role in the aftermath of the September 11 terror attacks is adamant about what she witnessed. Leonardi said she saw legions of angels guarding the Pennsylvania site where United Airlines Flight 93 crashed. When she arrived at the site just three hours after the crash, she was struck by numerous elements. She was so startled, she kept it to herself out of fear that her co-workers would think she lost her mind.
“I started seeing shimmery lights…and it was kind of misty and that’s when I first saw angels there,” Leonardi said. “And I didn’t say anything to the guys because you can imagine if I would have said, ‘I just saw angels on the crash site,’ they’d have called the office and they’d have said, ‘She lost her mind and tell her to go home.’”
They were dressed as if they were in warrior garb like a Roman centurion, she said. There were so many of them, you couldn’t see their faces. She continued to see flickers of light, each angel guarding the crash site. Her hope in sharing her story is that people would know that God was present on 9/11.

Pastor John Boston was driving down the road when another car crossed the center line and came barreling toward him. The pastor swerved to miss the vehicle and struck a utility pole, sending a live transformer crashing onto his car. Immediately the metal and glass began to buckle on the intense heat from thousands of volts of electricity. His 4-year-old daughter, who was with him, was trapped inside the burning car. The seat belt was stuck and the door wouldn’t open. That’s when a scruffy looking stranger came out of nowhere and easily opened the smashed door. The man removed him from the car and walked him 20 feet away from the vehicle to safety before the car exploded in flames.
“He said my name is Johnny, the police are almost here and I can’t be here when they get here but you’re gonna be okay,” said Pastor Boston. “And then the man was gone.”
He said that people who tried to rationalize the situation thought the circuit breaker simply tripped and Johnny fled because of a sketchy past. However, firefighters say there are some aspects of what happened that defy logic, reason and science. Pastor Boston is convinced he encountered an angel that day.

Margaret Jones from Lancashire, U.K., claims she has had a very specific experiences with angels – one of which purportedly unfolded at her church 20 years ago while she was singing in a choir. She felt the pressure of what seemed like a human hand touching her own hand. As she was standing on the edge of the choir, she assumed that the lady, Deborah, who had been playing the organ, had come over to join them; so she thought nothing of it. The hand then left hers and a few moments later she opened her eyes and was surprised to see that Deborah was still sitting at the organ, and wasn’t beside her. It was after the service that a fellow congregant told Jones that an angel was next to her and touched her hand.


In the Hands of an Angel

He was just seven years old when his 5-year-old cousin, Chetty was sick with cancer and later passed away. At the time, his family didn’t want to talk about the death. They told him to keep quiet, despite the situation devastating him. Whenever his family went to Chetty’s home for visits, he’d always ask to play on the swing with him.
After Chetty died, he went to his house for a visit. In his loneliness, he decided to go outside and sit on the swing they had always played on. As he sat there thinking about how things used to be, Chetty walked up to him and an angel was holding his hand. The angel had beautiful blonde hair and was dressed in a long white gown, never saying a word, just smiling. Chetty looked at him and said, “I’m not in pain no more.” He and the angel turned and walked until they simply faded away.

Annabel Beam was only nine years old when she miraculously survived a 30-foot fall. While she was playing with her sisters outside their Texas home, she plummeted inside a hollowed out cottonwood tree. An emergency helicopter rushed her to a hospital in Forth Word, where brain and spinal injury teams prepped for Annabel’s arrival but astonishingly, Annabel was unscathed.
After the accident, Annabel began describing religious visions she had while she was unconscious. She says that she met a guardian angel during the incident.

“I started to wake up in the tree and I could hear the fireman’s voices. And I saw an angel that looked very small, like a fairy.”
The angel then winked and he told her, “I’m going to leave you now and everything is going to be okay.”
The angel stayed with her the entire time, shining a light so she could see until she was rescued.

In spring 2006, Hilary was 27 years old.  She and her sister, Holly, were on their way to their maternal grandfather’s funeral.  Hilary was driving down a country road in rural Mississippi when suddenly the wheel of her truck got caught in a deep rut in the road.
She lost control of the vehicle and the truck flipped over four times before landing in a field.  Hilary hung upside down from her seatbelt and everything went black.
“I thought I was blind.  I was terrified,” says Hilary.  Holly was the lucky one.  She only suffered a broken wrist, cuts and bruises.
Hilary says her life flashed before her eyes and she remembers thinking she didn’t want to die.  She cried out to God,” You’ve got to help us! Please send your angels.”  The next thing Hilary remembers is a man talking to her who tried to keep her awake.
Soon several people stopped including a physical therapist and a preacher and his wife.    The preacher’s wife stayed with Hilary, then prayed with her mother out loud on the phone until the paramedics arrived.  It took nearly 30 minutes for the ambulance to get there and when the jaws of life finally freed Hilary from the wreckage, she had lost six pints of blood.
Hilary was in shock and barely breathing.  She suffered two broken legs, several broken ribs, a ruptured colon and bruised lungs.  Her back, collarbone, tailbone, pelvis and right femur were shattered.  Her hips were crushed. Her blood pressure dropped to 55/0 and she felt like she was drowning.  Hilary lost consciousness.  As the EMTs scrambled to stabilize her in the middle of the muddy field, Hilary’s spirit left her body.
OUT OF HER BODY
As the EMTs worked on her, Hilary says her spirit came out of her body, softly and peacefully.  Soon she was hovering over the scene, looking down on the cars and people below.  Her pain and panic disappeared.  “I felt completely peaceful,” says Hilary.  “It was a complete peace, the most joyful feeling I have ever known.”
Hilary says an angel took her hand and she looked up.  She saw a gold mansion that looked like it was trimmed with icing.  “It was sparkling, gleaming and glittering,” she says.  “I can’t begin to describe the vibrant, kaleidoscope colors I saw.  It was so crazy.”
Then Hilary saw her dad’s best friend, Merle Kilgore, who passed away the year before.  She says he looked wonderful, not sickly like he did before he died from lung cancer.  Then Hilary saw Johnny and June Carter Cash, her dad’s godparents.  “Johnny was playing the guitar and June was playing the harpsichord.  The music was gorgeous,” says Hilary.
Hilary kept trying to talk, but no one responded to her.  “There was no sense of frustration or sense of loss.  It felt amazing – so much joy,” says Hilary.  She looked over and saw her grandparents, Hank and Audrey, who died before she was born.  Hank smiled, put his arm around Audrey and turned to walk away.  As she watched them go, Hilary knew she wouldn’t be going with them.  “Then, as quickly as it lifted, my spirit came back down and I returned to my body,” she says.  After her pulse returned, Hilary became conscious again.
Hilary underwent 23 painful surgeries. While she was in the hospital, a friend called The 700 Club to have the counselors pray for Hilary.  Along with her mother’s constant prayer, she credits prayers from 700 Club phone counselors with getting her though the difficult nights.
It has been a long journey, but Hilary is happy to be alive.  Today she walks without a cane though one leg is a little shorter than the other.  She was reluctant to share her vision of heaven at first.
In the hospital, Hilary read Don Piper’s book, 90 Minutes in Heaven, but she says she didn’t’die like he did since she was never pronounced dead.  This experience has left Hilary more mature spiritually and helped her realign her priorities. “I want people to know there is a heaven and to not give up hope.  There were times that I was down and out, but I tried to keep my faith and stay strong and keep positive,” says Hilary.
In Summary,
However encounters with angels leave us infinite possibility to not only learn more about them, but also provide infinite possibility for growth and transformation. Most times, encounters are completely unexpected. The key to encountering an angel is to be present, aware and look around for the signs. With these things you can tune into, experience and act upon the signs you receive from angels.We all have a start date and an end date, known only by God before we were born. The clock began ticking the moment we were conceived in the womb. But as God’s story of heaven reveals, we also have an exit strategy.