What to do for Humanity?

Article: What to Do For Humanity?
Author: Olusola David, Ayibiowu 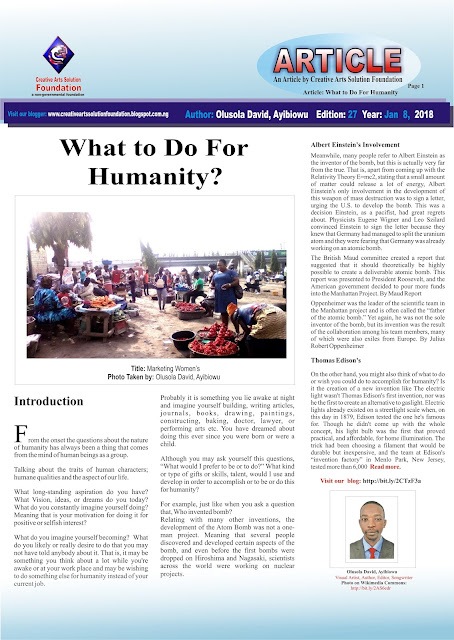 From the onset the questions about the nature of humanity has always been a thing that comes from the mind of human beings as a group.

Talking about the traits of human characters; humane qualities and the aspect of our life.

What long-standing aspiration do you have? What Vision, ideas, or dreams do you today? What do you constantly imagine yourself doing? Meaning that is your motivation for doing it for positive or selfish interest?

What do you imagine yourself becoming?  What do you likely or really desire to do that you may not have told anybody about it. That is, it may be something you think about a lot while you’re awake or at your work place and may be wishing to do something else for humanity instead of your current job.

Probably it is something you lie awake at night and imagine yourself building, writing articles, journals, books, drawing, paintings, constructing, baking, doctor, lawyer, or performing arts etc. You have dreamed about doing this ever since you were born or were a child.

Although you may ask yourself this questions, “What would I prefer to be or to do?” What kind or type of gifts or skills, talent, would I use and develop in order to accomplish or to be or do this for humanity?

For example, just like when you ask a question that “Who invented bomb?”
Relating with many other inventions, the development of the Atom Bomb was not a one-man project. Meaning that several people discovered and developed certain aspects of the bomb, and even before the first bombs were dropped on Hiroshima and Nagasaki, scientists across the world were working on nuclear projects.

Meanwhile, many people refer to Albert Einstein as the inventor of the bomb, but this is actually very far from the true. That is, apart from coming up with the Relativity Theory E=mc2, stating that a small amount of matter could release a lot of energy, Albert Einstein’s only involvement in the development of this weapon of mass destruction was to sign a letter, urging the U.S. to develop the bomb. This was a decision Einstein, as a pacifist, had great regrets about. Physicists Eugene Wigner and Leo Szilard convinced Einstein to sign the letter because they knew that Germany had managed to split the uranium atom and they were fearing that Germany was already working on an atomic bomb.

The British Maud committee created a report that suggested that it should theoretically be highly possible to create a deliverable atomic bomb. This report was presented to President Roosevelt, and the American government decided to pour more funds into the Manhattan Project. By Maud Report

Oppenheimer was the leader of the scientific team in the Manhattan project and is often called the “father of the atomic bomb.” Yet again, he was not the sole inventor of the bomb, but its invention was the result of the collaboration among his team members, many of which were also exiles from Europe. By Julius Robert Oppenheimer

On the other hand, you might also think of what to do or wish you could do to accomplish for humanity? Is it the creation of a new invention like The electric light wasn’t Thomas Edison’s first invention, nor was he the first to create an alternative to gaslight. Electric lights already existed on a streetlight scale when, on this day in 1879, Edison tested the one he’s famous for. Though he didn’t come up with the whole concept, his light bulb was the first that proved practical, and affordable, for home illumination. The trick had been choosing a filament that would be durable but inexpensive, and the team at Edison’s “invention factory” in Menlo Park, New Jersey, tested more than 6,000 possible materials before finding one that fit the bill: carbonized bamboo.

Do you want to fix a specific problem or bring about a certain reform in our world todays? Also do you want to provide a haven where people may obtain much-needed rest and comfortable relaxation in the midst of their busy schedule? You may not necessarily need to build a physical structure, such as an architect. But you may want to build up the social structure of your nation, and that may be the gifting and areas of your personal and tremendous contribution for humanity.


Labels: What to do for Humanity?