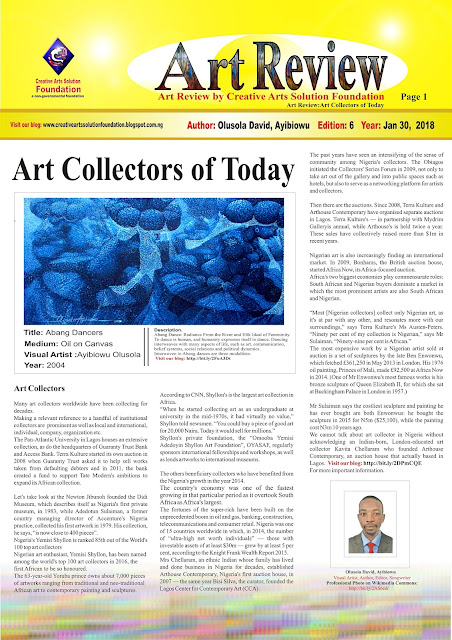 Receive Special Offers From Qatar Airways from your Local City

Qatar Airways has planned to give local deals and offers which are related to your local city.
Subscribe to our newsletter to make your journey with us more rewarding and entertaining.

Learn about Qatar Airways latest deals and special offers, exciting news on our products and services, be inspired to travel to more than 150 destinations around the world with the "Best Airline of 2017", and much more. Your next big adventure is only an email away.Stay updated!

Many art collectors worldwide have been collecting for decades.
Making a relevant reference to a handful of institutional collectors are also prominent as well as local and international, individual, company, organization etc. The Pan-Atlantic University in Lagos houses an extensive collection, as do the headquarters of Guaranty Trust Bank and Access Bank. Terra Kulture started its own auction in 2008 when Guaranty Trust asked it to help sell works taken from defaulting debtors and in 2011, the bank created a fund to support Tate Modern’s ambitions to expand its African collection.
Let’s take look at the Newton Jibunoh founded the Didi Museum, which describes itself as Nigeria’s first private museum, in 1983, while Adedotun Sulaiman, a former country managing director of Accenture’s Nigeria practice, collected his first artwork in 1979. His collection, he says, “is now close to 400 pieces”.
Nigeria’s Yemisi Shyllon is ranked 85th out of the World’s 100 top art collectors
Nigerian art enthusiast, Yemisi Shyllon, has been named among the world’s top 100 art collectors in 2016, the first African to be so honoured.
The 63-year-old Yoruba prince owns about 7,000 pieces of artworks ranging from traditional and neo-traditional African art to contemporary painting and sculptures.
According to CNN, Shyllon’s is the largest art collection in Africa.
“When I started collecting art as an undergraduate at university in the mid-1970s, it had virtually no value,” Shyllon told newsmen. “You could buy a piece of good art for 20,000 Naira. Today it would sell for millions.”
Shyllon’s private foundation, the “Omooba Yemisi Adedoyin Shyllon Art Foundation”, OYASAF, regularly sponsors international fellowships and workshops, as well as lends artworks to international museums.
The others beneficiary collectors who have benefited from the Nigeria’s growth in the year 2014. The country’s economy was one of the fastest growing in that particular period as it overtook South Africa as Africa’s largest.

The fortunes of the super-rich have been built on the unprecedented boom in oil and gas, banking, construction, telecommunications and consumer retail. Nigeria was one of 15 countries worldwide in which, in 2014, the number of “ultra-high net worth individuals” — those with investable assets of at least $30m — grew by at least 5 per cent, according to the Knight Frank Wealth Report 2015.
Mrs Chellaram, an ethnic Indian whose family has lived and done business in Nigeria for decades, established Arthouse Contemporary, Nigeria’s first auction house, in 2007 — the same year Bisi Silva, the curator, founded the Lagos Center for Contemporary Art (CCA).
The past years have seen an intensifying of the sense of community among Nigeria’s collectors. The Obiagos initiated the Collectors’ Series Forum in 2009, not only to take art out of the gallery and into public spaces such as hotels, but also to serve as a networking platform for artists and collectors.
Then there are the auctions. Since 2008, Terra Kulture and Arthouse Contemporary have organised separate auctions in Lagos. Terra Kulture’s — in partnership with Mydrim Gallery — is annual, while Arthouse’s is held twice a year. These sales have collectively raised more than $1m in recent years.
Nigerian art is also increasingly finding an international market. In 2009, Bonhams, the British auction house, started Africa Now, its Africa-focused auction.
Africa’s two biggest economies play commensurate roles: South African and Nigerian buyers dominate a market in which the most prominent artists are also South African and Nigerian.
“Most [Nigerian collectors] collect only Nigerian art, as it’s at par with any other, and resonates more with our surroundings,” says Terra Kulture’s Ms Austen-Peters. “Ninety per cent of my collection is Nigerian,” says Mr Sulaiman. “Ninety-nine per cent is African.”
The most expensive work by a Nigerian artist sold at auction is a set of sculptures by the late Ben Enwonwu, which fetched £361,250 in May 2013 in London. His 1976 oil painting, Princes of Mali, made £92,500 at Africa Now in 2014. (One of Mr Enwonwu’s most famous works is his bronze sculpture of Queen Elizabeth II, for which she sat at Buckingham Palace in London in 1957.)
Mr Sulaiman says the costliest sculpture and painting he has ever bought are both Enwonwus: he bought the sculpture in 2015 for N5m ($25,100), while the painting cost N3m 10 years ago.
We cannot talk about art collector in Nigeria without acknowledging an Indian-born, London-educated art collector Kavita Chellaram who founded Arthouse Contemporary, an auction house that actually based in Lagos
In which focuses on modern and contemporary art from West Africa. As an avid collector, her prestigious and meticulous research in art auction houses as a result to the global recognition of numerous modern African masters, like Bruce Onobrakpeya, Ben Enwonwu, Kolade Oshinowo, Ablade Glover, Yusuf Grillo and Uche Okeke.
In other words, she is one of the trustee of the Prince’s School of Traditional Arts and a member of the African Acquisition Art Fund of Tate Modern in the United Kingdom. She has shared with Larry’s List her rich experiences and profound vision of Nigerian art.
One of the thing that made her to start collecting art, is that she started collecting art for a very simple reason – because she wanted to fill the walls in my house. Ant that she came from a family that collected art and had an understanding from a young age about the value and importance of art. Kavita Chellaram also started collecting artworks as an extension of her own heritage and experiences, first collecting Indian art and then later move to collecting Nigerian art.
One of the first works of Nigerian art Kavita Chellaram bought were at an exhibition in Lagos in 1977. She bought works by Twins Seven Seven and Jimoh Buraimoh. At that time, the art market in Lagos as we know of today was almost non-existent. Her collection covers both modern and contemporary works of art as she’s also interested in both emerging artists at the beginning of their careers, as well as modern masters who have influenced a new generation. In that sense, the collection is, more or less, a comprehensive survey of modern African art, from works in the 1950s and 1960s to works made today.
She made mentioned of her decision when she decide to resell a work, she normally take into consideration the other works she have by the same artist in her collection, to make sure that the collection still represents an overview of the different artistic practices of that artist. In a nutshell, it is also important to consider the timing in the art market: whether that artist or particular work is ready to be resold, and whether this would contribute to the artist’s development of their market.
Fresh Collectors
The fresh collectors are advice to Buy what the love, because the will have to live with it. As a result of this, it is most important to buy what you are passionate about, as this gives a value that is not considered in economic terms. Young collectors of today should so that contemporary art in Nigeria is a great investment at the moment, it is still largely affordable compared to international prices, but is creating buzz and a new global interest nowadays.
The art collecting scene in Nigeria has really picked up. Ten years ago, there were four or five people buying, we now get new clients in each auction, which span both Nigerian and intentional clients. It is important that Nigerians are also collecting from within the country, and this is a trend that we are excited to see more of. There is still a long way to go in terms of the art infrastructure in Nigeria, but we look positively to the developments made so rapidly in the last few years. We now see foreign auction houses creating a focus on African art, which shows the strength of our market.