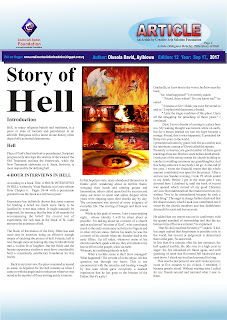 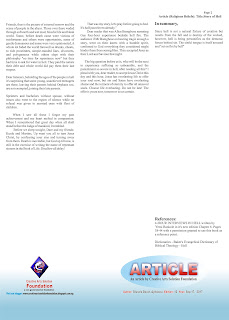 
Introduction
Hell, in many religious beliefs and traditions, is a place or state of torment and punishment in an afterlife. Religions with a linear divine history often depict hells as eternal destinations.

Hell
Place of God's final retributive punishment. Scripture progressively develops this destiny of the wicked: the Old Testament outlines the framework, while the New Testament elaborates on it. Jesus, however, is most responsible for defining hell.

In summary,
Since hell is not a natural fixture of creation but results from the fall and is destiny of the wicked, however, hell is being personifies as the demonic forces behind sin. The sinful tongue is itself aroused and "set on fire by hell"

References:
4-HOUR INTERVIEWS IN HELL written by 'Yemi Bakole in it's new edition Chapter 6. Pages 38-44 with a permission granted to use this book as a reference point.
Dictionaries - Baker's Evangelical Dictionary of Biblical Theology - Hell
Labels: Story of Hell