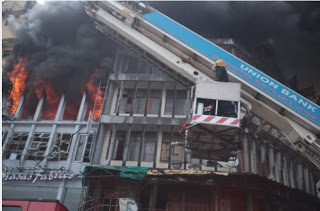 Two high rise building that housed several shops in the Lagos Central Business District, were gutted by fire in the early hours of yesterday. But no life was lost in the inferno that raged for several hours, however, properties worth millions of naira were destroyed.The two incidents took place at No 43, Martins Street, Balogun Market, Idumota and inside the jewellery market located on Dosumu Street, respectively.Though the cause of the inferno could not be ascertained, prompt response of responders from the Lagos State Emergency Management Agency (LASEMA), Lagos State Fire Services, UBA Fire Services and the Federal Fire Services, stopped the fire from destroying the two buildings and spreading to other adjoining structures.One of the affected buildings was a six-storey at Oluwole Market, adjacent to Mandillas Building, and the other, a three-storey located at Dosumu Street.While the fire at the three-storey building on Dosumu Street was successfully put off, fire servicemen were still battling to extinguish the fire  at the six-storey building at Martins Street as at 7:40pm, yesterday.Director General, Lagos State Emergency Management Agency (LASEMA), Dr Olufemi Oke-Osanyintolu, Oke-Osanyintolu, said at the scene that emergency officials were able to localise the fire and stopped it from spreading to other buildings.“We received call earlier this morning that there is a fire incident that involves two multi-storey buildings at Martins Street and Dosumu Street in Lagos.“Immediately we activated our emergency response plan and other stakeholders in managing emergency moved to the scene.“We are able to locate and localised the fire but the major challenge we are having is access to major source of the fire; secondly, we discovered that they stored highly inflammable materials in the building. The way the building is positioned is adjacent and interlocked to the centre area, but we make use of combined team method to localise the fire which spread from one shop to the other but we are trying to put it off now.”Chief (Mrs) Folashade Ojo, Iyaloja of Lagos, who also visited the scene, called for regular public power supply to prevent indiscriminate use of generators causing fire outbreaks.Director General, Lagos State Safety Commission, Mr Lanre Mojola, attributed crowd control as a major challenge at scenes of fire and other accidents.Mojola said that Lagos State emergency team and other stakeholders were working hard in ensuring that the fire did not affect any other building in the area.Olanrewaju Elegushi, Special Adviser to Gov. Babajide Sanwo-Olu on Lagos Central Business District, said the state would soon provide fire hydrants in the area to enable the servicemen have access to water.The South West Commanding Officer, Federal Fire Service, Mr Ganiu Olayiwola, said there was need for hydrant in Lagos markets, saying that insufficient access to water affected putting off the fire.