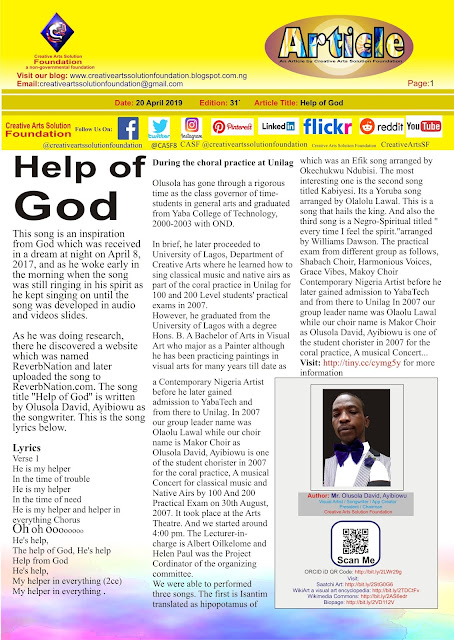 This song is an inspiration from God which was received in a dream at night on April 8, 2017, and as he woke early in the morning when the song was still ringing in his spirit as he kept singing on until the song was developed in audio and videos slides.

As he was doing research, there he discovered a website which was named ReverbNation and later uploaded the song to ReverbNation.com. The song title ‘’Help of God’’ is written by Olusola David, Ayibiowu as the songwriter. This is the song lyrics below.

During the choral practice at Unilag

Olusola has gone through a rigorous time as the class governor of time-students in general arts and graduated from Yaba College of Technology, 2000-2003 with OND.

In brief, he later proceeded to University of Lagos, Department of Creative Arts where he learned how to sing classical music and native airs as part of the coral practice in Unilag for 100 and 200 Level students’ practical exams in 2007.


Hear all of the songs by Olusola David, Ayibiowu in our free music discovery app, ReverbNation Discover

Email newsletters for bands at ReverbNation.com


However, he graduated from the University of Lagos with a degree Hons. B. A Bachelor of Arts in Visual Art who major as a Painter although he has been practicing paintings in visual arts for many years till date as a Contemporary Nigeria Artist before he later gained admission to YabaTech and from there to Unilag. 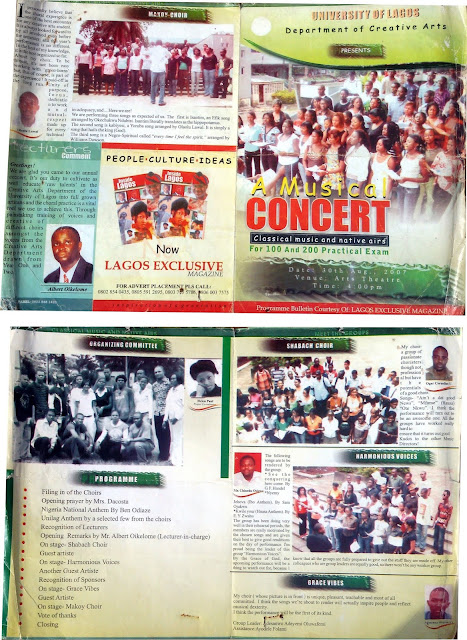 In 2007 our group leader name was Olaolu Lawal while our choir name is Makor Choir as Olusola David, Ayibiowu is one of the student chorister in 2007 for the coral practice, A musical Concert for classical music and Native Airs by 100 And 200 Practical Exam on 30th August, 2007. It took place at the Arts Theatre. And we started around 4:00 pm. The Lecturer-in-charge is Albert Oilkelome and Helen Paul was the Project Coordinator of the organizing committee.
We were able to performed three songs. The first is Isantim translated as hipopotamus of which was an Efik song arranged by Okechukwu Ndubisi. The most interesting one is the second song titled Kabiyesi. Its a Yoruba song arranged by Olalolu Lawal. This is a song that hails the king. And also the third song is a Negro-Spiritual titled " every time I feel the spirit."arranged by Williams Dawson. The practical exam from different group as follows, Shabach Choir, Harmonious Voices, Grace Vibes, Makoy Choir

Personal Development of the song.
The personal development, as well as the spiritual aspect of the song, is very curial. As the song is going through campaigns on social media like facebook, twitter, Instagram, YouTube, Linkedin, etc. In other to allow people to become fans and Add fan members on ReverbNation and hear from the people’s opinions about the song for the purpose of studio recording, contribution, sponsor and promotion, until perfection is fully earned and the full album will be label and release by the sufficient grace of God for him as soon as possible.

Service to God
His place of worship is The Redeemed Christian of God, Church of the Nazarene where he is serving the Lord and working with God in His vineyard in Ushering department as an Usher.

The help of God is available for those children of God that have faith and diligently seek him early, will definitely and surely find Him.